The renamed via cuts across the campus of Italian Adventist University Villa Aurora. The street names of Florence, Italy, are about to get a surprising addition. On December 10, 2021, the city will rename one of its streets “via Ellen Gould White,” to honour one of the co-founders of the Seventh-day Adventist Church and a remarkable author, church leaders in the country said.

The ceremony will be the last step in a request by Italian Adventist University Villa Aurora presented to city officials. The school asked to name the street in front of the new buildings on campus, which today is known as via del Pergolino, with the name of the Adventist pioneer. 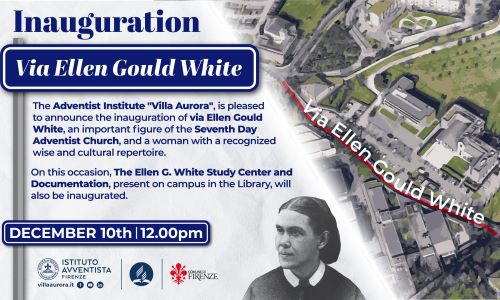 The city of Florence will rename one of its streets “via Ellen Gould White” [Image: Hope Media Italia]

After the city of Florence said it accepted the request of a name change, school leaders thanked the local government “for the sensitivity shown in acknowledging the good intent and how suitable the submitted proposal was.”

The city government said it considered several aspects in granting the request. Among them, it stated that the faith-based institution has been on that property since 1947. In addition to school offices, it has used some of its facilities to lodge families of patients hospitalized in a nearby health-care facility.

The city also explained that only the buildings of the school surround the street of the proposed name change, and, according to a centuries-old custom, the streets of Florence often take their names from the realities surrounding them. Finally, the city emphasized that the name change will help passers-by access the facilities without taking the wrong path. Right now, two very similar names that are close to each other — via del Pergolino and viuzzo del Pergolino — have proved confusing.

On the day of the street-naming ceremony, the university will also inaugurate an Ellen G. White Centre of Studies and Documentation inside the school library.

In preparing for the new centre’s opening, the school shared information about the life and work of Ellen White. It communicated to the public that White (1827-1915) is “a very special person” for the Seventh-day Adventist Church. Along with Joseph Bates and White’s husband, James, she co-founded the religious movement officially formed in 1863 as the General Conference of Seventh-day Adventists. “A religious leader, prolific writer, social reformer, but also a wife and a mother, her multifaceted influence has been felt far beyond confessional boundaries.”

School leaders noted that in 2014, Smithsonian magazine included her on its list of the “100 Most Influential Americans of All Time.” For Seventh-day Adventists, school leaders said, White is also a special person because “they recognize in her work the manifestation of the biblical prophetic gift.”

After her death, a foundation was created — the Ellen G. White Estate — where readers can access White’s work in the original English and many other languages, including Italian, school leaders said. “To further promote knowledge of Ellen G. White’s work and writings, study centres have been created in various regions of the world.” They are usually known as White Estate branch offices, research centres, and study centres.

The centre on the Italian Adventist University Villa Aurora campus will be included in the official list of centres managed by the Ellen G. White Estate, school leaders said. It will include a wide selection of White’s published works in English, Italian, and other languages. These works will be included in the school’s library and available to readers and researchers, they said.

The original version of this story was published on the Adventist Review website.